My Ritual of Collecting Rocks 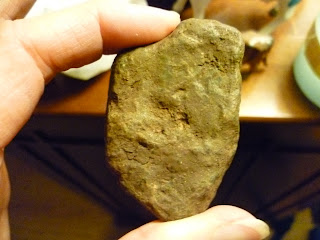 Do you collect rocks? I have been collecting heart-shaped rocks since my daughter was little. Every trip to the coast we'd be on the lookout and our collection would grow. When my honey and I hadn't been together too long, we realized we shared a passion for sitting on sandy beaches, sifting for hours through tiny rocks and stones, tossing the keepers into a bucket or one of our baseball caps. We created rock works of art that now decorate the downstairs bathroom, because that's where they can be seen and appreciated best.

But more than the beauty of the rocks themselves, I am fascinated by the history of the rocks, the time and space where this rock might have dwelt for who knows how long before I claimed it. When I attended my Celebrant graduation in New Jersey we were each given a rock from the shores of the Atlantic, hand chosen for us by the Director of the Celebrant Institute, Charlotte Eulette. We were told to hold them, take them home, or leave them. My rock had sat on the Atlantic shore, so many miles from my home for who knows how long -- Christopher Columbus and numerous Indian tribes may have scampered over it. It had energy, strength, history.

My good buddy Tenaya recently got to fulfill a life dream of hers, to visit South Africa. Prior to her departure we had a lengthy conversation about what this trip meant to her. She was going for the soccer games, traveling all over the country for six weeks, a trip that was going to most certainly be not only memorable but life changing for her. So many historical events had occurred there, wars, clashes of cultures and ultimate freedom. I asked her to bring me back a rock.

The picture atop this post is my South Africa rock. I know it doesn't look like much. It's brown like dirt, but it's smooth and solid and it fits in my hand. She told me it came from the Sudwala Caves and offered me the website where I found this- "Looming above the beautifully wooded valley of the bustling mountain torrent known as the "Houtbosloop", there is a majestic massif known as Mankelexele (Crag on crag / Rock upon rock). In the great massif dolomite rock there is one of the most astonishing caves in Southern Africa, an as yet unplumbed complex of passages and giant chambers extending into the mysterious heart of the mountain.

The Sudwala Caves are the oldest known caves in the world...(and are) situated in Pre-cumbrian dolomite rocks of the Malmani Group, formed over a period of 3000 million years, capturing in stone a time when the area was covered by warm shallow in-land seas. These are amongst the second oldest known sedimentary rocks on the earth, and represented in the cave are fossils of the first oxygen producing plants on the earth, Collenia."

Clearly this was not just a rock, but container of a million memories, a survivor of a million rains followed by scorching heat, followed by untold ancient animals, plants and people crunching and growing around and over it. Holding it I reflect on the people of South Africa, all the struggles they have endured that I cannot begin to imagine. Somehow it gave me strength and centered me to hold it, knowing I too could endure whatever life might throw my way.

Many life ceremonies and rituals include stones, metaphors for a feeling or honor as when stones are placed on headstones in Jewish tradition. These little gems may look like 'just a rock' but they carry their secrets and wisdom to us from deep in our shared earthly history. My rock sits on my desk, a daily reminder to me of what I know I am capable of, as well as the deep responsibility I hold for the future.
Posted by Coach Cindie Wilding at 8:36 PM

Coach Cindie Wilding
Certified Life Cycle Celebrant! Working with you to create a unique ceremony for new baby, becoming a teen, house blessing, weddings, funerals, croning, new job, divorce, retirement or any other significant life passage you would like to mark with ceremony.